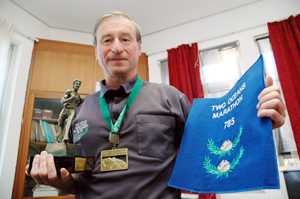 The University of Cape Town has learned with shock of the death of one of our academics, Associate Professor Kevin Rochford. The UCT community is deeply saddened by his death and horrified at the way in which it occurred. Professor Rochford died on 22 April, in what appears to be an attempted hijacking in front of his home in Little Mowbray.

He has contributed significantly to the academic enterprise over more than 30 years and has made his mark in many other leading activities, including sport at UCT, and particularly in running. He has the longest unbroken membership of any UCT sports club in our history and initiated non-racial long distance running events in 1974.

The Vice-Chancellor, Professor Njabulo S Ndebele is currently travelling with Dr Max Price (Vice-Chancellor Designate) and has been informed of the tragic incident. He has expressed his sorrow and condolences to the family.

We will remain in touch with Professor Rochford's family and our heartfelt sympathies are expressed to all his family members, colleagues, friends and students.