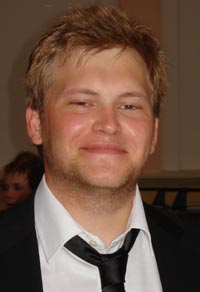 The film also features the acting talents of fellow UCT graduate Nicholas Pauling, who has been hitting the South African theatre stages in a variety of productions, including Amadeus and Who's Afraid of Virgina Woolf? Pauling plays a scriptwriter who is struggling to complete his latest work, and finds himself withdrawing into the world of his screenplay.

Since the completion of the film and its subsequent awards, Collins has opened up his own production company in London, Devilishly Handsome Pictures, and has just completed a short film titled Stripped, written by UCT drama master's graduate Sanjin Muftic and starring UCT acting graduate Andrew Laubscher.

Trailers of both films can be found at their website.