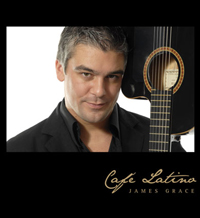 James Grace, head of classical guitar studies at UCT's South African College of Music, will launch his third solo album, Café Latino, with a concert at the Centre for the Book on Friday, 24 October.

Café Latino, together with his previous two albums Portrait and Granada - Music of Spain, has been financed and produced by Grace's own record label, Stringwise Records. Grace founded this label with the intention of producing debut albums by selected graduates from UCT who might not have the financial means to produce their own CDs.

"Recording your own album is a costly venture," says Grace. "Studio time is not cheap, and once you factor in expenses such as photographers, designers, printers and manufacturers, you're sitting with quite a bill!

"My aim with Stringwise Records is, for the right graduate, to be able to cover these expenses, produce the album and get it out there. The internet is a great way to do that, and cuts out another expense - the distributor."

Grace sells his CDs exclusively online, one of the only musicians in this country to take advantage of e-commerce and not relying on distribution companies to market and sell his product.

The 24 October concert will also feature a display of selected handcrafted guitars from Spain, imported by www.saguitars.co.za, and De Reuck Signature Range wines.