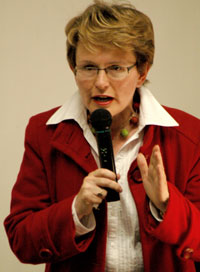 Cape Town was recently described as one of the world's "rising urban stars" by Newsweek magazine, and a colloquium hosted by the city last week looked at what universities can do to keep that star soaring.

Executives from all four universities in Cape Town, as representatives of the Cape Higher Education Consortium, joined Mayor Helen Zille (left) and other senior executives of the City of Cape Town for a meeting on 23 November. The aim of the seminar was to identify areas of collaboration, and create a framework for such partnerships.

Higher learning institutions have a key role to play to give Cape Town the edge it needs, said Zille. Economic structures, values, cultures, institutions and histories have taken on an increased significance as the source of the skills and technology that underpin the "competitive advantage", she added.

The city and CHEC plan to sign a formal agreement that will identify key projects in May 2008.