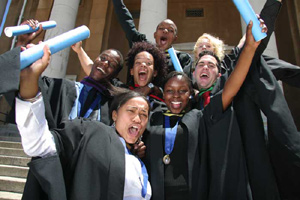 According to the latest Teaching and Learning Report, black African undergraduate student success rates showed marked improvements between 2002 and 2006.

The report has changed in format and now covers quantitative and qualitative dimensions of teaching and learning, with emphasis on faculty-based initiatives to improve both facets.

It also contains a summary of the strengths and challenges identified through the academic reviews conducted in 2006 and progress with regard to the implementation of the teaching- and learning-related sections of the University's Quality Improvement Plan, submitted to the HEQC in December 2006.

Although the course performance gap between African and other students diminished somewhat at the 200- and 300-levels, the reverse is true at the 100- and particularly the 400-levels.

In 2006, students on extended programmes performed well at the 100-level. Success rates among Academic Development Programme students averaged 84% in commerce, 73% in science and 90% in engineering.

The improvements in course success rates are coupled to overall undergraduate performance. Completion rates, measured in relation to the progress of first-time entering students, have improved. Sixty-seven percent of the 2002 entry cohort, in comparison with 61% of the 1998 entry cohort, completed their undergraduate qualifications within five years.

Improvements among the 2002 entry cohort resulted from reduced rates of drop-out in 'good academic standing' and academic exclusion.

As is the case among mainstream students, completion rates among those entering extended curriculum programmes varied markedly in relation to faculty. Completion rates within the two extended BBusSc cohorts examined in this report (69% and 61% of the 2001 and 2002 cohorts, respectively) compared well with commerce mainstream (70% and 77%).

They were markedly higher than the average completion rate among the 1998 to 2002 extended BCom cohorts (34%).

The picture is slightly different for postgraduates. While the honours graduation rate exceeded the NPHE 60% benchmark between 2002 and 2006, master's and doctoral graduation rates remain markedly lower than the NPHE benchmarks.

At doctoral level this can be linked to a 25% increase in enrolments between 2002 and 2005. However, a comparison of master's and doctoral graduates between 2003 and 2006 shows that the average time to degree at both levels has shortened.

There are various factors that might have influenced the improvements in retention and throughput. The Institutional Planning Department plans to conduct an in-depth investigation on these during the course of 2008.

However, analysis of the progress report on the implementation of the University's Quality Improvement Plan suggests that there has been significant progress in integrating strategies aimed at improving teaching and learning into mainstream faculty plans.

These activities include changes in teaching models to accommodate more small-group teaching, the establishment of mentoring schemes, improvements in the tutorial system, and the strengthening of monitoring systems to identify problem areas.

All faculties have put in place a mechanism to monitor compliance with the memoranda of understanding between supervisors and postgraduate students. In addition, several small-scale research and development projects within the Postgraduate Writing Project have been initiated by the Centre for Higher Education Development (CHED) to assist with improving postgraduate throughputs.

A process of developing policies to reduce the use of temporary staff has commenced. A pilot programme in EBE to strengthen the course monitoring system has been launched and class representatives received training from the Department of Student Affairs for the first time at the beginning of 2006. It is hoped these measures will improve the student feedback systems.

The significant improvement in the completion rate within the 2002 extended BCom cohort (54%) and the particularly low rate of academic exclusion within this cohort (17%) are noteworthy. These trends have continued beyond 2002.

Significant numbers of students entering the General Entry for Programmes (GEPS) in science (more than 40% of each entry cohort) were excluded on academic grounds. Although the completion rates among students beginning their BSc degrees in the GEPS programme between 1998 and 2002 averaged only 31%, this figured must be viewed in the context of the lower entry criteria for this group.

At the end of the first year, about two thirds of the students are able to proceed to the next year, where they are taught in the mainstream. Of these, about half graduate with BSc degrees, which compares with the mainstream average of 58%. It is worth noting that GEP accounts for a significant proportion of the African graduates (29 out of 57 in 2000).

Tribute must also be given to innovative teaching practices which are showcased in the report. The initiatives identified through the Academic Reviews and by the deans are:

Details of these initiatives can be viewed on the IPD's "Good Practice" website.