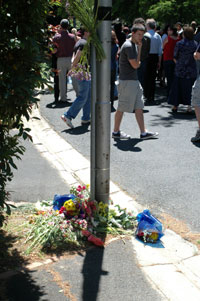 On Monday scores of faculty and students of the law faculty undertook a silent protest walk to Roslyn Road, Rondebosch, scene of Professor Mike Larkin's death following a violent mugging on Friday afternoon.

Students placed flowers at the spot.

Head of the commercial law department, Larkin had been walking home from campus when he was accosted and stabbed, allegedly by two men. The protest walk was lead by faculty dean Professor Hugh Corder, joined by acting Vice-Chancellor, Professor Martin West, and members of Larkin's family.

In press reports Corder described Larkin as "a much-loved lecturer and important mentor to younger staff members". In a message to the UCT community, West wrote: "We are deeply saddened by his passing and horrified at the manner in which it occurred".

Larkin came to UCT in January 2006, after a distinguished association as a student and professor at Wits Law School. He was one of this country's top company lawyers, renowned for his expertise in the field, a fine and respected teacher, and a loved colleague.