Memory of slavery resurrected through powerful work of fiction 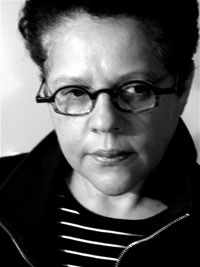 "At one point in the Cape's history, two out of every three people were slaves." This remarkable statement was made by Deputy Vice-chancellor Professor Martin Hall, at a special reading by debut novelist, Yvette Christiansë, last week.

The reading, which took place at the Centre for African Studies gallery on Friday 2 November, was part of a series of events that fall under the collective banner of the UCT Respect campaign. This campaign aims to boost the culture of courtesy and mutual respect on UCT campuses to ensure that the transformation of the institution is kept on track.

Professor Hall, who spearheads the Respect campaign, opened the reading by reminding the audience that the campus grounds were once home to hundreds of slaves, many of whom still lie buried in the Rustenburg Slave Burial Ground on Middle Campus.

"Here at UCT we have a slave burial site on our middle campus and we are currently consulting with the public on how best to memorialise this important site. The landscape of slavery is literally beneath the ground we walk on at the university," said Hall.

He continued, "At this point in time we are celebrating many significant dates in the history of slavery in the Cape and around the world. This year sees the 200th anniversary of the Slave Trade Act, which abolished the slave trade throughout the British Empire, and next year will be the 200th anniversary of the slave rebellion led by Louis of Mauritius. Such important dates demand that we reflect on the history of this city and the thousands of people who lived and died here as slaves."

Professor Hall's introduction was followed by an evocative reading by Yvette Christiansë, from her powerful debut novel, Unconfessed. Christiansë was born in South Africa under apartheid and emigrated with her family at the age of 18. She currently lives in New York and teaches English and postcolonial studies at Fordham University.

Unconfessed was honoured as a 2006 PEN/Hemingway Award finalist. It tells the story of Sila van den Kaap, a real slave that was accused of murdering her son and sentenced to a lengthy sentence on Robben Island in the 1800s.

The fictional story features characters based on real people that actually lived at the time. Christiansë has used historical archives as a starting point from which to create characters and a narrative that is respectful to the historical record but creative enough to express the emotions and painful truths not contained within them.

"The slaves within historical records exist only as the colonial state allowed them to exist - as criminalised, problematic individuals," said Christiansë. "My job was to look at what was not written and to try to mark the spot where a person like Sila had existed."

"It was impossible to fit Sila's voice into a waiting form. This would not have been true to her experiences and her memory."

Unconfessed was launched in South Africa on Thursday, 1November, and promises to become a significant work of postcolonial African literature.