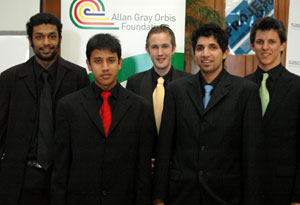 The Department of Information Systems presented a showcase of third- and honours-year student projects at the Jameson Hall on 30 November, and announced the three winning teams.

Third-year winners were the SoluCare team, led by Nishant Lalla for their relationship management portal, which they developed for the Allan Gray Orbis Foundation. The system allows the foundation to communicate with the students they sponsor through web-based messaging and announcements.

Two teams won in the honours section. The ÃœberSoft team, led by Megan Bruyns, won with their customer relationship management system, TouchPoint, which they developed for Open Box Software. TouchPoint is used to manage the company's process from opportunity recognition to the point the company take on a new project.

Team Smile, led by Devin de Vries, also won the honours category with their project titled Where's my shuttle? Their system provides an SMS-based information service for public transport. The team also recently took the top spot in the UCT leg of the Student Business Plan/National Innovation Competition for their project, and will now enter the national stage of the competition.