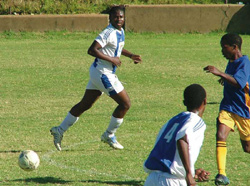 Dedication, loyalty and team spirit are behind the Soccer Club's "brilliant" performance this year.

Both the men and women's teams will represent the Western Cape in the national South African Student Sports Union (SASSU) championships in December, beating off the three other universities in the region for the honour.

It's the second consecutive year that the women's team has won the provincial SASSU league, but the side could not attend the national games last year because of a lack of funds and because most players head home at the end of the academic year.

But the team has planned ahead this year and has asked members to stay for the SASSU tournament, reports club chairperson Mari Engh.

"It was a matter of thinking ahead, before we even qualified. We sort of reckoned that we will win again and prepared ourselves," Engh said.

On the finance issue, Engh added they were busy fundraising and were confident that they would make the target.

Beside the SASSU games, UCT club has also done well in the domestic leagues, with the men's team finishing first in the Wynberg-based Cape District Football Association's premier league. Next year they'll play in the association's super league.

On the other hand, the women's team, which has a mix of local and international students - from neighbouring Africa, Europe and the US - finished third in the Cape Town region of the South African Football Association (SAFA Cape Town).

But it's still a memorable result for the women, says Engh.

Engh praised the coaching staff "for building a team spirit that has never been seen before".

"They've done a magnificent job, focusing on playing a good game and creating a positive atmosphere."