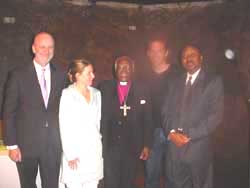 UCT students scooped the top prizes in the UN-sanctioned Alliance of Civilisations essay competition. In an awards ceremony in the Sanlam Studio at the Baxter on 8 October, Archbishop Emeritus Desmond Tutu handed over prizes of US$4 000 to Steven Kenyon, who won the postgraduate category, and US$1 000 to Alexandra Searle, top student in the undergraduate category.

The competition, which was sponsored by the Spanish Embassy in partnership with UCT and the University of the Western Cape (UWC), was aimed at promoting an alliance of Islam and Christian civilisations, and specifically what it is in the South African experience that has meant that such an alliance could be forged.

In an entertaining speech, Tutu argued that no religion propagates violence.

"There are good Christians and bad Christians, good Muslims and bad Muslims," he said. "It is not faiths that are the problem but the faithful."