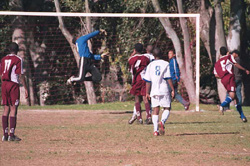 Pitching in: Council has approved R10 million to fund the upgrade of the soccer/basketball facilities on the Kopano field.

Fees for 2008: Council decided to increase tuition fees for 2008 by 7.76%. This is the measure of UCT's internal inflation as agreed by the Finance Committee. An interesting change in the approved fee rules for 2008 is that students will not be allowed to pay amounts of more than R400 in cash at the fees payments cashier. Other forms of payment will be accepted, but cash payment must in 2008 and in future be made to the university's bank account at Standard Bank, always quoting the student number as reference.

Student housing fees for 2008: Council decided to raise these fees by 7% for 2008. Council did so in view of its concern to keep residence fees affordable though the residence internal inflation rate is higher. (For catering residences, the meal options are influenced by food inflation, currently running at some 11%.)

Senior appointments: By law, Council must make all appointments. It does most of this by way of delegation, but reserves senior appointments for Council decision. Announcement of the details will be made elsewhere, but as this meeting Council considered proposals for the deanship of the Faculty of Engineering and the Built Environment as well as for the Centre for Higher Education Development, and took steps to have a search/selection committee formed for the deanship of the Faculty of Law, from which Professor High Corder will step down at the end of 2008.

Capital appropriations: While student numbers have increased threefold since the 1970s, student amenities have not. The all-weather surface of Hare's Field has proved a major boon, and one result has been a huge increase in the number of student hockey teams. At this meeting, Council approved a capital budget appropriation of R10 million to fund the upgrade of the soccer/basketball facilities on the Kopano field. This field has an interesting history. It is part of the showgrounds (the road to Kopano from the Main Road, or what is left of it is Show Road) and was the site of an Anglo Boer War field hospital and a World War I training base. Among those trained there were the men who were so tragically killed when the troopship the SS Mendi was sunk, an important event now marked by a memorial at the site. The new all-weather soccer facilities, with the old swimming pool (built after WWII) and the new gymnasium being built next to it, will be a fillip to student amenities in a heavily populated area: the nearby Kopano, Baxter, Graça Machel, Marquard and Tugwell residences house over 1 800 students.

Issues of continuing concern: The Council was briefed about issues of continuing concern. First was the residence catering operation, where arrangements must be made for 2008 and where (as has been reported in the Monday Paper and elsewhere) there have been disputes between the contractor and some of its staff. Secondly, Council was briefed about the negotiations underway for replacing the 1966 joint agreement that regulates the partnership between UCT and the Province in health delivery and health professional training and clinical research. Finally, and closely related, Council was briefed about the impact both on service and on academic work of the funding arrangements for the teaching hospitals. These matters will continue to enjoy Council's attention in the months ahead.

The major issues for Council at meetings in October will be: