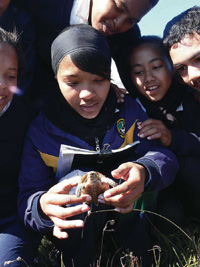 Stick your neck out: Sixty grade 9 learners from Rusthof High School explored the wonders of Harmony Flats Nature Reserve during Arbor Week. An encouraging reptile find was a Parrot-beak Tortoise, or Common Padloper.

The air buzzed with excitement as 60 grade 9 learners from Rusthof High School explored the wonders of Harmony Flats Nature Reserve during Arbor Week.

Harmony is a tiny green gem hidden on the Cape Flats in Strand, surrounded by extremely poor communities and rampant urban sprawl. It supports a unique mixture of threatened vegetation, of which there is less than seven percent left in the world.

The combination of Renosterveld and Lowland Fynbos, known as Lourensford Alluvium Fynbos, is home to an astonishing variety of plants including the Critically Endangered Ixia versicolor.

They met up at the reserve with a team from Cape Flats Nature, a partnership of various biodiversity and conservation groups.

The morning's activities began with talks about the area's fauna and flora and on the importance of conserving the reserve. Then it was off to the field, and the hunt for flowers, butterflies and reptiles was on.

Two species of butterflies were observed, one the common African Monarch, and the other a Silver-bottom Brown. It is hoped that further surveys will uncover more and special butterfly species, considering the special plants that occur in the area.

An encouraging reptile find was a Parrot-beak Tortoise, or Common Padloper. This little tortoise, named for its strongly hooked beak, averages only 70-90 mm in length when fully grown. It once shared Harmony Flats with the Geometric Tortoise, but while the hardier padlopers were able to survive the frequent unnatural fires that plagued the reserve, the Geometrics were not.

Much excitement resulted from the discovery of a Spotted Skaapsteker. Despite its intimidating name, this handsome snake is not dangerous to humans and mostly feeds on rodents, lizards, frogs and other snakes.