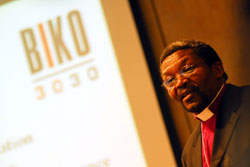 The Steve Biko Foundation's 30th Anniversary International Commemorative Conference was opened with an address by Bishop Malusi Mpumlwana of the Ethiopian Episcopal Church at UCT on 10 September.

Mpumlwana was an anti-apartheid activist who was one of the founding leaders of the Black Consciousness Movement along with Steve Biko. In his address he argued the benefits of embracing the black consciousness philosophy.

'It's an attitude of mind,' he explained, 'a way of life which enables people to achieve a self-reliant confidence.'

Steve Biko's son Nkosinathi Biko (pictured left) attended and spoke briefly at the conference which is titled Consciousness, Agency and the African Development Agenda. The conference seeks to examine the historical role of black consciousness as well as its present-day relevance, and includes input by delegates from a wide variety of backgrounds. It runs from 10 to 12 September, and ends with the 8th Annual Steve Biko Memorial lecture, which will be delivered by President Thabo Mbeki in the Jameson Hall at 18h00 on 12 September.