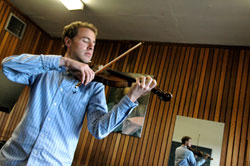 New heights: Patrick Goodwin has been appointed as the new deputy concertmaster for the Cape Philharmonic Orchestra.

UCT graduate and violinist Patrick Goodwin has been appointed as the deputy concertmaster of the Cape Philharmonic Orchestra (CPO).

In what he described as a 'dream job' and a 'fantastic opportunity', Goodwin will sit next to the concertmaster and occasionally lead the orchestra. His appointment comes after he performed as a soloist with the orchestra for the first time in 2005.

'It has always been my dream to play as a soloist with the Cape Philharmonic Orchestra since I moved to Cape Town,' he says.

He graduated from UCT in 2004 with distinctions in violin performance and chamber music. Goodwin was also a member of the National Youth Orchestra from 2000 to 2002 and became concertmaster of the UCT Symphony Orchestra and String Ensemble.

Goodwin recently obtained his master's degree in violin performance with distinction from the De Paul University in Chicago. He is the first UCT graduate to be appointed as deputy concertmaster to the CPO, and is just 24.

Professor Peter Klatzow, director of the SA College of Music, said they were surprised but delighted that Goodwin had been appointed to such a senior position at his age. While at UCT, Goodwin studied under Professor Farida Bacharova.

UCT student, Paula Fourie, is now a full-time member of the CPO's viola section. She is also a student of Professor Farida Bacharova.