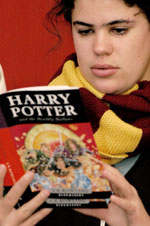 Tara Weinberg is something of a Harry Potter fiend. Has been for a long time. Now with a new movie - darker, the critics say - and a new book - the final, the author says - Weinberg had a chance to help others go potty over Harry.

For the past 10 years, the Harry Potter series of books has been a large part of many young people's lives, but for humanities student Tara Weinberg, it's been huge.

She's been a fan of the books since the age of 12, and owns a choice assortment of Potter memorabilia. She also runs what's thought to be the biggest fan site on Potterdom in Africa, www.pensieve.com, named after the bowl of silvery liquid found in the Hogwarts wizardry school headmaster's office, a bowl that holds memories.

Pensieve has clocked some 300 000 visitors over the years. More than 100 people log on to her website every day to look at the Flash animations, learn magic tricks (Weinberg is a graduate of the nearby College of Magic), discuss the next book - alas, author JK Rowling has announced that Harry Potter and the Deathly Hallows is to be the last in the series - in interactive forums, and study for their WOMBAT (Wizards Ordinary Magic and Basic Aptitude Test).

Weinberg runs the site with the help of friends and colleagues in the US and UK, who she chats with via the Internet.

"Harry Potter on the web is absolutely huge," says Weinberg. "Some people are actually so big that they get invited by JK Rowling to interview her," she adds.

Sadly, Weinberg hasn't received that call yet, although she did visit the UK and had snaps taken of herself at the famous Platform 9 3/4 at King's Cross Station in London, from which Harry takes the Hogwarts Express to get to boarding school.

Over the recent school holidays, Weinberg got to share her interest with a host of kids, co-ordinating a workshop and chaperoning them to the screening of Harry Potter and the Order of the Phoenix as part of the Cape Town MTN Sciencentre's holiday programme.

She also attended a sleepover workshop for 120 children aged eight to 12 on 20 July for the release of Deathly Hallows at one in the morning on 21 July. That same morning, she also attended a special celebration at Kalk Bay Books, decorated like the Gryffindor common room and with Potter foods - think butterbeer and sweets from Honey Dukes - for sale.

"The Harry Potter phenomenon has become a large part of kids' lives," explains Weinberg. "The books are so popular because they hook the reader into a believable, magical world, and the notion of believing in magic is very appealing to adults as well as children."

Now that Rowling has called it quits on the books, some of the magic will disappear, though. (Although Hollywood still has to finish its take on the books.)

"Some of the children are a bit sad that it's all going to come to an end," Weinberg says.