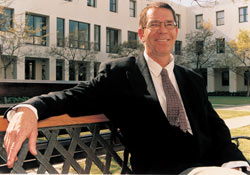 Show business: A new study by Barry Standish (above) and Antony Boting shows that the film industry is making a healthy contribution to Western Cape and national growth.

The Western Cape film industry is giving the Cape and national economy a welcome leg-up, according to a new study.

The research was conducted by Barry Standish, an economist at the Graduate School of Business (GSB), and Antony Boting, a consultant at Strategic Economic Solutions and an MBA graduate of the GSB.

According to the study, the total turnover of the Western Cape film industry is estimated at R2.65 billion for the 2005/6 financial year, of which about 77% (R2.03bn) was generated in Cape Town. Of the R3.5-billion contribution to the national GDP, long-form productions - feature films, television shows and the like - contributed R1.49 billion, commercials R1.16 billion and stills R0.9 billion.

The industry has also given the job market a boost. It created about 6 058 full-year job equivalents in the Western Cape, and at least 2 501 indirect jobs, mostly in the catering and accommodation sectors.

The study - a first in the country - will help to monitor the size and growth of the industry, and strengthen its competitive advantages and skills, says Standish.