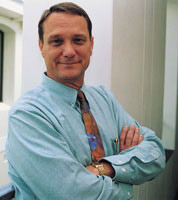 Professor Steve Burgess of the GSB

Professor Steve Burgess of the Graduate School of Business (GSB) has been elected to a three-year term on the Executive Committee of Europe's top academic marketing body, the European Marketing Academy (EMAC).

EMAC is a key communication network that distributes knowledge on marketing theory, research and application and promotes international exchange in the field of marketing.

Burgess said that he hopes to forge closer ties between African and European researchers.

'African researchers can play an important role in advancing our knowledge of effective marketing in emergent markets and low-income countries worldwide,' he said.

EMAC members in more than 57 different countries across all five continents were eligible to vote in the elections.

Burgess was recognised this year with the Marketing Science Institute's first-ever Visiting Scholar Award in the US. His 30-year career in marketing, sales and management spans both the corporate and academic worlds. Since joining the GSB in 2001, he has worked to build a world-class marketing programme and research focus that places special emphasis on the implications of South Africa's emergent economy and transitional society character for competitiveness.

His research focuses on marketing strategy and consumer context in emergent consumer markets.