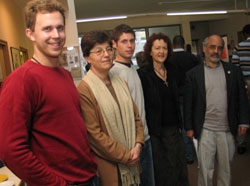 The winning team: Award and medal winners Gerard Ralphs, Emma Bedford and Daniel Davson with the director of the Centre of African Studies, Professor Brenda Cooper, and Professor Crain Soudien, the chairperson of the Harry Oppenheimer Institute's committee of management.

The Centre for African Studies (CAS) congratulated its 'exceptional' students in 2006 with class medals and awards that were presented on 25 May.

They were recognised for obtaining top marks in their classes. Postgraduate students were handed Heinemann Book Awards, while those doing undergraduate courses received medals.

Alexander Santillanes, who was absent, received two accolades, one for Debate in African Studies and the other for Images of Africa, both master's courses.

Public Culture master's student Gerard Ralphs was given a book award for his 'excellent' work on Problematising the Study of Africa: Interrogating the Disciples.

Emma Bedford, who is studying her masters in art history, also received a book award for the Collection Representation and Display course.

Professor Crain Soudien, chairperson of the Harry Oppenheimer Institute's committee of management, said every year they were faced with great challenges and it was 'wonderful' to see the CAS produce exceptional talent.

'It is a pity that we can't present awards to all of our students,' he said.