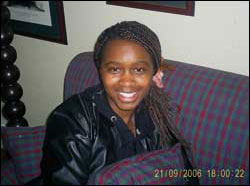 Microbiology student Tsungai Jongwe has received an SAWISE/Angus bursary to continue her work on tuberculosis.

To some it's biological treasure hunting, to others it's the difference between life and death.

In her search for a treatment for tuberculosis, 22-year-old microbiology honours student Tsungai Jongwe is foraging for bacteria in the leaves of indigenous plants. Specifically, she's looking for antimicrobial substances to be used in antibiotics to fight the TB bacterium.

That's work she can now continue thanks to an SAWISE/Angus bursary of R10 000, given to black female graduates showing above-average potential.

Jongwe's research is critical, now more than ever.

Fuelled by HIV, South Africa has one of the highest TB rates in the world. Globally, according to a 2005 World Health Organisation report, TB infection is spreading at the rate of one person per second, killing more people than any other infectious disease.

"There is an urgent need for drug discovery programmes," says Jongwe's supervisor, Dr Paul Meyers, of the Department of Molecular and Cellular Biology.

Science, Jongwe says, can help cure many of Africa's ailments. She just wants to do her bit.