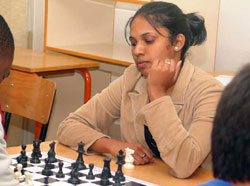 "We were disappointed with the turnout, and especially with our performances," Rachoene said. Even Woman International Chess Master Jenine Ellappen was unable to make any inroads, coming eighth overall.

Nonetheless, the club has made some recent strides after mixed fortunes between 2003 and 2006.

"Last year we competed at the SASSU Games at the University of Pretoria and did better, missing third position by only one point," Rachoene says. "And we did have four players in the top 10."

Despite the hard knock they took this year, losing several senior players, prospects look brighter. The inter-residence chess tournament took place in March - "which Smuts won with so much ease", Rachoene jokes - and they have a brand new crop of young players.

Importantly, the club has wooed Dr Deon Solomons of the Department of Mathematics and Applied Mathematics as coach.