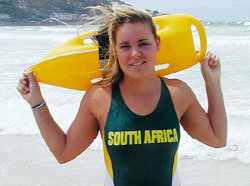 Lifesaver Jade Antunes is more than just a bay watcher; she's also a national champion - both in and out of the water.

Jade Antunes has made her mark early this year.

Antunes has already bagged 25 lifesaving firsts at various local and national championships this year, and she's just warming up. She was the Western Province captain for the South African National Stillwater Champs in March, where she won the Open Victrix Ludorum and scored the highest points overall. That led to her selection for the South African High Performance Stillwater Lifesaving Squad for three competitions later this year.

In the past four years she's represented South Africa five times, including at the Commonwealth Lifesaving championships in England last year, where she captained the team and where she won three individual bronze medals. And the list goes on.

Antunes, a second-year occupational therapy student, says it all started with her love for water. "I love the beach and I love competing in water; lifesaving put these two together perfectly."

Lifesaving has both freshwater and surf components. Freshwater contests take place in pools or dams, and most of the events feature mock rescues, where the fastest time wins. Surf competitions, on the other hand, involve various water and beach events; here again, the quickest takes the laurels.

"My strength is freshwater lifesaving and I definitely have better results in the pool. In surf I only concentrate on the swims and some team events." In freshwater events swimmers have to take part in all the events to make SA teams and squads, but in surf events there are swim specialists, craft (board and ski) specialists and beach specialists (runners).

Antunes competes under the New Balance Fish Hoek Surf Lifesaving Club banner, where she's also an active lifesaver. That involves certain tasks, one of which is voluntary beach duty.

But her heart's in the competitions, she says.

"I want to keep representing South Africa over the next few years. My ultimate goal is to win a medal at the world lifesaving championships."