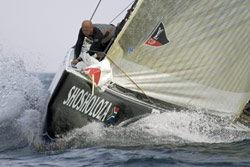 Aboard Shosholoza, the South African boat making a bid for the 2007 America's Cup.

South Africa's Team Shosholoza gave US team BMW Oracle, the moneyed America's Cup favourite, a fright when they took a brief lead in the most recent Louis Vuitton Act in Valencia, Spain.

But, thanks to favourable winds, the Americans took first place by a mere 47 seconds, reports Die Burger.

Several of the crew on board Shosholoza are UCT alumni, including Alex Runciman, Michael Giles, Joe Heywood, Charles Nankin and Ken Venn. Team Shosholoza is already knee-deep in the Louis Vuitton Cup, which includes 13 acts running from April to June this year.

The team that wins the Louis Vuitton Cup will take on the Swiss defenders, Alinghi, in the grand finale, the nine-race America's Cup match over June and July.

Shosholoza will face teams Luna Rossa Challenge, Italy, and China in acts four and five at the Louis Vuitton Cup this week.