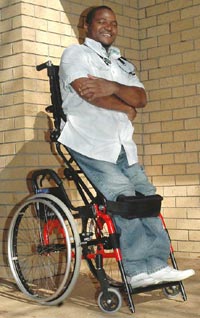 When Botswanan Ronald Mothelesi applied to study medicine at four South African universities, there was one thing that set him apart from the other applicants: he's in a wheelchair.

"Three of the four universities turned me down, but UCT said 'yes, we will take you'," he recalls.

At age five Mothelesi contracted polio and has been in a wheelchair since. He never gave up on his dream of becoming a doctor though, and while he was told it would be difficult, he believed that "success is failure turned inside out".

Now, in his final year of MBChB at UCT, the limitations to his dream have been ousted following the arrival of his new wheelchair, one that also allows him to stand.

"Surgery assistance is a requirement in my degree," says Mothelesi. "Because I could not stand, I previously had to sit on my wheelchair's armrest."

With the new custom-built, hydraulic wheelchair, he can stand for up to 45 minutes. "Basically, it has helped me a lot during practicals and to assist in theatre," says Mothelesi.

It also helps him get around the hospitals better, as this wheelchair's slim design allows him to pass through single-door entrances.

Accessibility to hospitals for people in wheelchairs is often problematic, he says. "Having the same disability doesn't mean you have the same limitation."

"The foundation specified that a large quantity of the money should go toward the mobility of disabled students."

The disability service also bought Mothelesi an automatic Toyota Corolla, which was modified with hand-operated controls and a hoist for his old wheelchair. The only problem now is that the hoist has not yet been fitted for the new wheelchair. But this won't curb his enthusiasm.

Mothelesi plans to do his internship in Cape Town.

"These are the hospitals I have worked in, and I know how to get around them."

"I want to be an ophthalmic surgeon - and I'd like to settle down."