Protest to "save Zimbabwe" 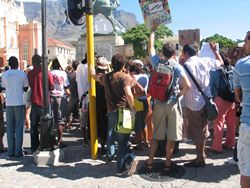 UCT students took to the streets last Friday to protest against recent events in Zimbabwe.

UCT students took to the streets on Friday, 16 March, to protest against the recent events in Zimbabwe.

Waving placards that read 'We Say No To Zim Abuse' and 'Save Zimbabwe', the students protested in front of Jameson Hall before marching to Parliament. Here, Independent Democrats leader Patricia De Lille, among others, joined them.

The march was organised by the Save Zimbabwe Coalition, which includes the Students' Representative Council (SRC), the Zimbabwe Student Society and other student groups.

SRC president Zuki Mqolomba said the students are the custodians of 'this great Africa of tomorrow' and were protesting to bring awareness about the 'atrocities' happening under President Robert Mugabe.

'Zimbabweans have the right to freedom of expression, of association and of affiliation,' she said.