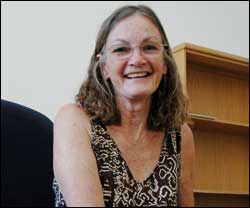 Drama queen: Prof Hazel Barnes has joined the Department of Drama as a Mellon Visiting Scholar.

"It all started because my mom thought I was very shy," says visiting academic Professor Hazel Barnes.

"She sent me for, what in those days was called, elocution lessons - I was instantly hooked, by this world of imagination and expression."

After receiving a BA honours in drama from the University of Natal, she jumped country to complete her master's in theatre studies at the University of Lancaster in the UK. Barnes - actress, director, drama lecturer and mentor - has been snapped up by the Department of Drama as the first in a string of Mellon Foundation Visiting Scholars to UCT.

She is currently working on an anthology of plays by Greig Coetzee, the South African playwright, actor and director. Recently she was the lead in Henrik Ibsen's Ghosts, and tried out film acting in a documentary on the Bhambatha Rebellion.

Barnes, who recently retired from the University of KwaZulu-Natal after 37 years, started one of her two six-week stints on 5 February.

She was nominated by head of department, Professor Mark Fleishman.

"I'm here to mentor young staff," she says, "to help them take the step towards writing and publishing critical analyses of works. Drama departments, in general, face the challenge of finding a way to disseminate their work."

The Visiting Scholars Project brings local and foreign academics to UCT to boost key research endeavours and mentor a new generation of researchers. It will run from 2007 to 2009 and is funded by the Mellon Foundation to the tune of $500 000. Another five international scholars are expected this year.