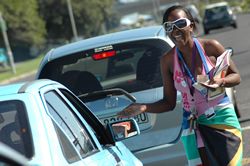 But then again, Sax Appeal Day - this year's theme was James Bond, for those who didn't get the Daniel Craig reference - is not about Paris high fashion. It's all a bit tongue in cheek.

This annual student magazine and its vendors might cause a giggly twitch, but the topics are closer to home than we would like to admit. Like the 2010 Soccer World Cup, our politicians' shenanigans and terrorism.

So too, the purpose it serves. It's all in the name of charity.

The proceeds from Sax Appeal go straight to SHAWCO.

The remaining 11 000 copies will be sold in Pick 'n Pays and at tourist spots.