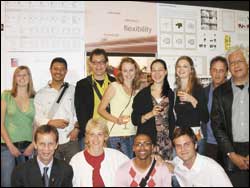 Seven students of the School of Architecture, Planning and Geomatics recently travelled to Venice on an invitation from the UniversitÃ  Iuav di Venezi, the school of architecture there, which showcased work of students from Southern Africa.

The students took part in a "fringe" exhibition at the 10th Venice Architecture Biennale, held every second year. The biennale ran from October 9 to November 14.

This prestigious event is viewed by over visitors and accredited journalists from around the world, as well as, this year, South Africa's Consul General in Milan, Alwyn Figgins.

The title for the UCT students' exhibition, Inter(face) Southern Africa: Engaging our lived realities, responds to the theme of the biennale, which for the first time focused on the design of cities, their urban infrastructure and social dynamics. The student work explored, at differing scales, various urban issues presented by South Africa's Third World reality, from proposed new settlements to enquiries around issues of transport, from the accommodation of different modes of trade to addressing the housing crisis.

The occasion marked the beginning of a potential relationship of exchange between the two institutions. Interest in the exhibition has been expressed by, among others, the Royal Institute of Architects for their exhibition in London, and the TransCape Exhibition in Cape Town, both to be held next year.