Into the lions' den for new dance show 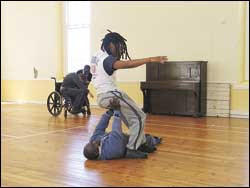 Disabled and able-bodied dancers perform together in Bluebeard, a Remix Dance project production.

Remix Dance Project, the dance company in residence at the Centre for African Studies, is currently rehearsing for a new show, Bluebeard, which will run in an unusual location - in and around the old lions' cages in the Old Zoo at Rhodes Memorial.

Founded in 2000 by Nicola Visser and Malcolm Black, Remix is unique in that it brings together performers with disabilities and those without. It touts itself as "exploring dance that values the honesty of the body".

Bluebeard, directed by Jacqueline Dommisse, provides new challenges. "It provides us with a vehicle to work with intimate violence and the natural predator within ourselves," says Tossie van Tonder, the movement director of the latest work.

The company started research on Bluebeard in 2005. It was an intense process that was rigorously structured by the directors over six months: a total of 12 sessions of three hours each.

These sessions of movement and voice improvisation were structured on one level, along the narrative sequence of characters and symbols in the Bluebeard story and on a parallel level, mined internal archetypes inherent in the story that inhabit the psychological and emotional body.

"The sessions had an intense focus, which followed the narrative thread of the story, condensed around symbols that become portals to our selves," said one company dancer.

Bluebeard is especially relevant in South Africa, says Van Tonder, where violence towards women and children has become pandemic. The lead character, Bluebeard, he of the famous fairy tale about a violent nobleman and his over-curious wife, has been revamped as a post-colonial, flashy tyrant who pretends to be disabled and captures two women instead of one.

The toughest problem arose in the resolution of the performance, says Van Tonder. "It's not a celebration, and finding a balance between the hopelessness and the artistic responsibility not to be in denial of the truth, and not to let Bluebeard get away, was difficult.

"We needed to be true to some form of individuation for the survivor."

Bluebeard will run from - at the Lion's Den, the Old Zoo, Rhodes Memorial. Bookings can be made at at Computicket on .