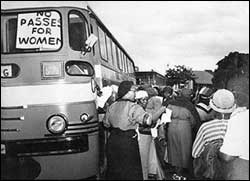 On August 9, 1956, approximately women marched to the Union Buildings in Pretoria to petition Prime Minister JG Strijdom on the extension of pass laws to African women. As they handed over the petitions, they sang:

Wathint` abafazi, Strijdom! Wathint? imbokodo uzo kufa! Now you have touched the women, Strijdom! You have struck a rock (You have dislodged a boulder! You will be crushed

The march was and remains a momentous occasion for South Africa and South African women. It represents an incredible moment in our history. A moment we still know too little about. It is unprecedented and has since not been matched.

I believe there have been major social and political gains since the 1950s but there are also a large number of concerns today that deserve the level of mobilisation that took place in 1956. Issues of poverty and violence are key among these and are as curtailing and restrictive to the vast majority of South African women as they were in the 1950s.

How much has changed since the women's march? How do we as women measure our progress or sometimes lack of progress in present day South Africa? I specifically would like to know what women in academia are thinking. In South Africa women in academia are not progressing at the rate they should be and black academic women remain on the bottom rungs of the academic ladder. (See Department of Science and Technology [2004] Facing the Facts: Women's Participation in Science, Engineering and Technology.)

Knowledge production in South Africa continues to be the terrain of white men. Now, as "native clubs" emerge to correct imbalances of the past, one wonders about the presence of "native" women in these new formations. Are black women there? Are they being heard? What is going on?

I was asked to write a short piece about National Women's Day. The brief was not restrictive and I decided to take this opportunity to raise a few concerns that I have on the issue of gender equity at UCT:

* Racial categories used are defined by the Employment Equity Act (1998).