James Baillieu to perform at the Baxter 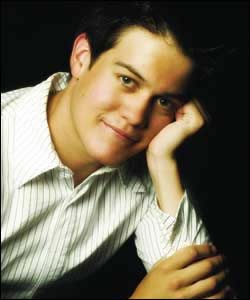 The South African College of Music (SACM) will present a performance by James Baillieu (piano) and friends on Tuesday, August 8, at 20h15 in the Baxter Concert Hall.

Baillieu, one of South Africa's top young pianists and accompanists, received the Bachelor of Music (performance) degree with distinction at UCT in 2004. Before enrolling at UCT he completed an individualised programme of study in piano and accompaniment at Trinity College of Music, London. As a distinguished music student at UCT he was awarded all the piano prizes, including the Contrapuntal Prize, the Sonata Prize, the Concerto Prize, the class medal and the Leonard Hall and Johnny Windham scholarships. He won the first Laura Searle Piano Competition and was the winner of the piano category in the Eric Chisholm Centenary competition. James also won the Stellenbosch Conservatoire's Rachmaninov Piano Competition in 2003.

In May 2004 he participated in the International Russian Piano Competition in California, at which as a laureate he was awarded a scholarship to study in Vienna. At the Vienna International Pianists Academy he was awarded the Rosario Marciano Prize for an eminent artistic personality.

James has received a full scholarship, the Avery Picker Award, from the Royal Academy of Music in London, where he is completing his postgraduate studies. He recently won the Flora Nielsen, Ludmilla Andrews, Helen Eames and Brenda Webb Prizes and was highly commended for his performance in the Lillian Davies Competition at the Academy. He was also awarded the Elisa Fawcett Award at the Royal Overseas League Competition and the MBF accompanist's prize at the prestigious Kathleen Ferrier Awards, which took place at London's Wigmore Hall.

James was recently invited to perform for the Queen of England and other members of the British, Danish, Swedish and Norwegian royal families. He has performed recitals in the UK, France, Austria, Germany, Belgium and Holland this year, and is continuing his performing and accompanying career that has already got under way in Europe, Asia and the United States.