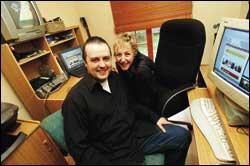 South African television has come a long way since the dark days of Equity boycotts and limited programming. So much so that two UCT drama graduates have launched the country's first television website, catering for TV slaves. And for anyone else involved in the TV industry for that matter.

The brainchild of Luke and Tashi Tagg, the debut website (www.TVSA.co.za) has over 660 shows and actors in the database, which is growing daily. In its first week, TVSA recorded more than page views, showing that South Africans really want a dedicated television website covering all channels. It's also the second website they own, an addition to TashiTagg.com.

In its first month, TVSA recorded more than a quarter of a million page views, had visits and signed up over 400 registered members.

"Whether you're a hardcore couch potato, an occasional sport watcher or a researcher looking for television-related information, TVSA is the place to go," Luke said.

The site is entertainment in itself. There are articles, interviews and celebrity Q&As by the site's writers and yes, bloggers.

"Viewers can sign up for a blog and become published TV columnists. They can rate shows and actors, find show/actor information, catch all the latest TV news, review shows, or chat about anything to do with TV on the TVSA Forums."

"In South Africa, there's also more potential for this kind of thing," Luke said. "It would get lost in the US."

It has been a long haul for the couple. After graduating, Tashi taught drama, wrote some arts and culture material for Oxford University Press and freelanced. Luke tried his hand at script writing and directing, eventually finding a niche as entertainment editor for iAfrica.com. It alerted him to the demand for material on popular culture.

Running two websites means 18-hour days, working from a small studio at their Claremont home, shared with a Jack Russell puppy, and dominated by TV and computer screens.

"The lifestyle is very difficult," Luke said. "But entertainment is in my bones. And, fortunately, we like each other," he said, glancing at his business partner.