Students the toast of the town 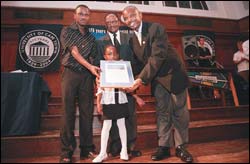 They set the bar high, this lot.

Recently, just over a dozen students were fÃªted at a gala ceremony in Jameson Hall, named as the winners of UCT's 2004 Student Leadership Awards. Cutting across disciplines and activities - the sporting high-flyers were seated shoulder to shoulder with the academic lions - the students were singled out for the signal contributions they had made to UCT over the year. Here are the winners in alphabetical order (mostly):

Matshepiso Dlamini, who initiated a community project aimed at girls' life-skills education, leadership training and mentorship with two township schools; and Tristan Gorgens, who was paralysed in a diving accident in October 2003 but, wheelchair-bound, has this year not only claimed back his positions on Shawco's board and its student executive, but has also designed and implemented a full-scale training, monitoring and evaluation programme for the organisation; each received an Executive Director: Student Development & Services Department (SDSD) award. Steve Kenyon, main stirrer at Varsity, was named the winner of the award for the most outstanding student leader in media.

Mieke Krynauw, student project-leader of Masizikhulise, a Shawco community-development project running out of the organisation's centre in Nyanga, won the award as the most outstanding student leader in community service.

Sicelo Mbambo, president of the Students' Representative Council (SRC), was chosen as the winner of the vice-chancellor's student leader award.

Mzamo Mjekevu, chair of the UCT Investment Society who initiated the Young Women in Finance Conference, hosted by his society; and Tali Reisenberger, a member of UCT's arm of the Treatment Action Campaign; were selected as winners of the awards for most outstanding student leaders in a society or student organisation.

Serini Murugasen, chair of the 2004 Health Sciences Student Faculty Council, was named as the most outstanding student leader in an undergraduate student faculty council.

Dominique Pitot, member of Senate, the AIDS Management Advisory Group, co-chair of the Institutional Forum, and chair of the Gender Forum, Student HIV Forum and the Residences Security Forum; and Phandle Phandle, the first blind student to be selected to the SRC, and also chair of both the UCT branch of the South African Students Congress and the Student Christian Fellowship's Choir; landed this year's deputy vice-chancellor's student leader awards.

Nicolene Ramsunder became the first winner of the Unilever Introduction to Business Management Course award, sponsored by Unilever South Africa, which will pay her way to the weekend training course in Durban next year.

Dr Pierre Redelinghuys, member of UCT's Postgraduate Students Associations' (PGSA) exco and co-author of the university's PGSA constitution, walked off with the award for most outstanding student leader in a postgraduate student faculty council.

Aadil Volkwin, head student at Forest Hill, won the award as the most outstanding student leader in a residence.

Winners of a few other prizes, including bursaries and scholarships, were also mentioned at the ceremony. These were Thabiso Monyatsi (the Abe Bailey Travel Bursary), Dominique Pitot (the Dwane Martin Memorial Scholarship), and Sharand Maharaj and Kate Orkin (who share the Goldman Sachs Global Leaders International Award). Maharaj also received the Sir Richard Luyt Scholarship.

Also applauded were the 27 students who have been selected to take part in SDSD's Unilever personal development course, a programme that in industry is targeted at trainee managers. The course will run in March 2005.

In another first, commerce undergrad Zakhele Gininda picked up the inaugural International Exchange Opportunity award, offered by the International Academic Programmes Office (Iapo), which will allow him to spend a semester of his undergraduate or pending postgraduate studies at one of the university's international partner institutions, taking courses there for credit towards his UCT degree. It won't cost Gininda a cent either, other than his usual UCT fees.

In one of the more touching moments of the evening, the university saluted student activist Elaine Sacco-Telite, the former UCT SRC president (but one in a string of senior student capacities she filled) who died in a car accident in August 2001. UCT awarded a special recognition award (posthumously), presented at the ceremony to her husband Tsietsi Telite and young daughter Relebohile, to Sacco-Telite to commemorate her inspirational leadership, both at UCT and beyond, in the early 1990s.

Members of the UCT community are encouraged to visit the Student Leadership Awards display in the foyer of the Chancellor Oppenheimer Library. The display is on until October 23. More information on the awards is available on the SDSD website www.sdsd.uct.ac.za, or by contacting Jerome September at , or at jseptem@its.uct.ac.za.