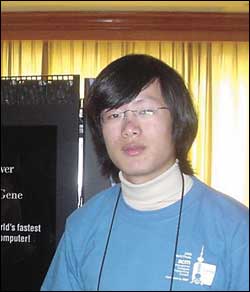 Some students amass courses, degrees and higher accolades with the same verve as collectors of rare objects; take young scholars like Shen Tian and Graham Poulter, who have a common base in computer science and mathematics.

Tian skipped first-year mathematics in 2003 and went straight to second-year maths. Although he's officially registered in the BSc (actuarial science) programme, he's also completed the requirements for a computer science major. When he graduates next week, it will be with a BSc in mathematics (distinction), statistics and computer science (distinction). He will also have completed the actuarial science first-, second- and third-year courses in the commerce faculty.

Tian has a flair for computers. In 2003 he competed at the International Olympiad in Informatics (IOI), winning bronze. Last year his team won the Association for Computing Machines International Collegiate Programming Contest (AMC ICPC ) World Finals. Aimed at universities, this is touted as the world's oldest, largest and most prestigious competition in computing sciences and engineering.

This year his team won the IBM Parallel Programming Challenge at the AMC ICPC finals in Shanghai, and he plans to attend the world finals next year.

He has also ploughed his considerable energies into the student organisation SHAWCO. 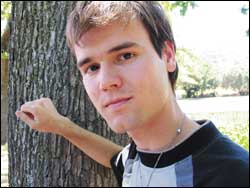 Poulter, a keen Mountain and Ski Club member and runner (he collected at bronze at the Two Oceans Half Marathon), wrapped up his BSc last year, obtaining distinction in applied mathematics, physics and computer science.

This year he finished his BSc (honours) in applied mathematics but has also taken courses in honours physics, electrical engineering and mechanical engineering - getting marks in the high 90s for all.

Like Tian, Poulter competed in the IOI in his first year at UCT and he and his team-mates won the Standard Bank Programming Challenge last year.

"I take my studying seriously," Poulter says. He takes a scientific approach to each subject, finding the optimal way of studying it. He tackled school with an eye on university scholarships, and is tackling university studies with his eye on PhD scholarships overseas.

But it's bioinformatics, the science of informatics used in biological research, that attracts him. He plans to do his master's degree in bioinformatics through the Institute for Infectious Disease and Molecular Medicine (IIDMM), using computers to contribute to the study of prevalent South African diseases.