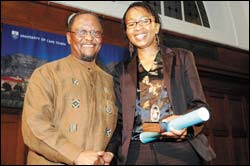 It was the cigar-wagging, paint-moustached Groucho Marx who once quipped: "Only one man in a thousand is a leader of men - the other 999 follow women."

Well, students had their pick of both genders this year, going by the laurels handed out at the UCT Caltex Leadership Awards Ceremony 2005 on October 7. The occasion allowed UCT the opportunity to toast the torchbearers among its student leaders.

The 2005 winners named on the evening were:

Why this lot? Well, as the saying goes, their rÃ©sumÃ©s speak for themselves. And they speak volumes.

Between them, the winners have covered just about every extra-curricular base at UCT. They've served on student bodies as varied as the Student Representative Council, the ANC Youth League, the Debating Society, Investsoc and the Hindu Students Society. Some held positions on blue-ribbon university groupings like the Admissions Committee, Senate, Council and the Institutional Forum, even the University Strategy Committee (bet you have never heard of that one).

They've drafted constitutions for residences and student charters for faculties. They've rallied together notoriously isolated postgraduate students. And when they wanted to explore the world beyond UCT's horizons, they struck out on their own.