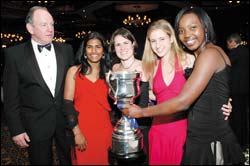 The 2005 Sports Awards Dinner will go down as one of the most memorable for many a year.

That had partly to do with guest speaker Dugald MacDonald, the rugby "old boy" who in April this year braved cold, polar bears and the company of two other "Ikey Icemen" - Dr Peter Berning and Ted Adam - to walk nearly 800km to the Magnetic North Pole in the 2005 Polar Race, becoming the first South Africans to complete the journey. Now we'd like to tell you what MacDonald said at the UCT bash, but because this is a family publication, we can't. Other than to say that it was inspirational and had to do with what is commonly known as "The Varsity Spirit".

And that MacDonald had them rolling in the aisles. So much so that the evening's MC, reporter Dan Nicholl, described it as "the best speech I've ever heard" in his Monday column for iafrica.com. Like Nicholl, we can only recommend that you catch MacDonald holding court at a nearby pub - try the one at the UCT Rugby Club - or other soirÃ©e. Just don't take the kids.

The event will also be cherished by the many award winners, of course. After recognising - through the presentation of half or full UCT colours and honours awards - the many who have represented their provinces or the country at varied levels, and to outstanding club administrators, attention turned to the big trophies. These went to: