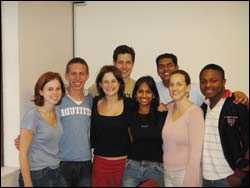 SHAWCO committees take over the reins

It's that time of the year when student organisations pass on the mantle from one group to another. So, too, a new youth-development steering committee took office at the Students' Health and Welfare Centres Organisation (SHAWCO) recently. The group is a blend of experience and youth, a number of "old hands" joined by a few first-timers keen to make a contribution. The committee for the next year will be Kate Orkin (president), Amit Dass (vice-president and finance), Janice Foster (curriculum planner), Nick Friedman (community relations), Jon Hodgson (curriculum planner), Pranisha Maharaj (marketing and events), Garikai Nyaruwata (evaluations), and Jane Watson (human resources). The committee - whose catchphrase reads: "Development Through Passion" - oversees the about 100 students that run the youth-development projects of SHAWCO. 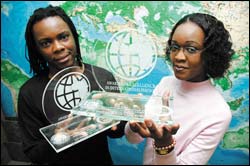 Out of Africa: Lebethe Malefo and Carol Ojwang show off the IEASA-Golden Key awards IAPO has won over the past two years.

IAPO among the awards again