Sports glory up for grabs 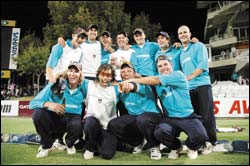 This coming Saturday, the Sport & Recreation Department hosts its annual sports awards dinner where it hosts the cream of UCT's sporting crop.

In turn, William Robinson (athletics and cycling), Margot Scheffer (gymnastics), JJ de Castro Maia and Sarah-Jane Johnson (both of SASSU-UCT) are in the running for the Turpin Cup for service to UCT sport.

Then the women's road and cross-country team (athletics), the basketball men's first team and the squash women's first team have been nominated for the Butterworth Cup as team of the year.

For performance of the year - and the Landstem Trophy - Jenine Ellapen (chess), the cricket one-day league winners, the women's hockey first team and the Boland 90 hike men's team from the Mountain & Ski Club are vying for honours.

Ellapen again features among the nominees for the Jamison Cup and Sportsperson of the Year honours, joining other nominees Paul Blake (hockey), Craig Kleu (rugby) and Kimberly Schmidt (water polo).