Rowers work up a head of steam 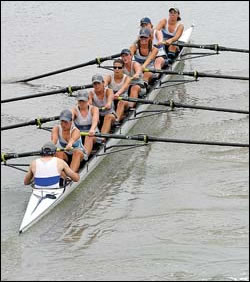 Rocking the boat: After a shaky start to their season, the UCT women's rowing team - here in action at the University Boat Race in Port Alfred - are hitting a purple patch.

The UCT women's rowers have been in fine fettle over recent weeks.

Take their performance at the annual intervarsity clash against Stellenbosch University and a select group of other teams - Alfreds, Elgin and Saxons - at Misverstand in late August. Here they outpaced all their rivals, including a semi-novice men's crew from Elgin.

(UCT men, on the other hand, were beaten by Stellenbosch. Albeit for the first time in ages.) But Misverstand was just a warm-up for the 2005 SASSU University Boat Race, hosted at Port Alfred on September 10. Again, the UCT women A team, one of four crews the club took on the trip, stood out.

They finished second out of 10 crews in the A division, bested only by Rhodes University in the final.

That singular performance earned the UCT women an invitation to row against Oxford and Cambridge - yes, those two - on the Zambezi River in Zambia over the week of September 19-26. Other South African teams include the women from Rhodes, and men's squads from Rhodes and the University of Johannesburg, who led the pack in Port Alfred.

This plum opportunity comes towards the end of what has been something of a Cinderella season for UCT's rowing women, says club president Taryn Smuts. After holding up the rear at the SASSU sprint regatta early in 2005, the team was floundering, barely able to field a squad, much less a competitive one.

"We were in a really bad state," she says.

Things started turning around in July. That's when the club picked up a bunch of new recruits who joined a group of about five or so stalwarts.

"Then we really started training very hard, and just went for it," says Smuts.

That's a philosophy that's paying off, it would appear.