Sunny side up for FNB UCT 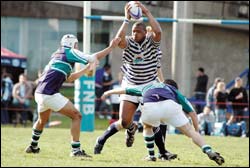 So what was all the talk about relegation anyway?

Brave words when your side's finally on a winning streak. But the FNB UCT first team does seem to have turned things around after it seemed nothing would halt their ignominious slide from the Western Province Super League A log to the second league.

They thumped Helderberg 36-10 on August 20, running in a hand of tries, as well as Oasis SK Walmers the following week, winning 32-13, and notching up four tries.

But director of rugby Spencer King cautions that the four games still in hand will be tough: Villagers, Northerns Northlink College (currently second on the log), Maties (first on the log) and Tygerberg (you guessed it, third on the log).

"But we must remain positive and we believe we can end on a high."

The camp is certainly upbeat.

King endorses this: "The mood is very confident and positive and the players are really enjoying it. They are playing for one another and have learned to win again."

Take a bow Alan Solomons, who has taken charge of the first team, along with stalwart Robbie Kempson.

With some astute, almost surgical, reengineering in the side, they look a different outfit. And the results show it.

"He [Solly] has brought some much needed fitness and structured play, with an emphasis on working together as a unit," King commented.

And Solomons, it would appear, is enjoying the challenge equally.

"Solly is really loving being back at his alma mater and is virtually working full-time at the preparation of the team."

(The season ends on September 24, but as they have the Tygerberg game to make up, it may mean they run a week later.)