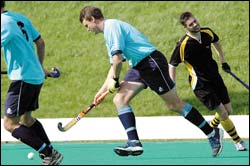 You'd expect the men's hockey first team to be down in the mouth.

After a four-year stranglehold on the WP Grand Challenge Trophy, this year they had to cede glory to Western Province Cricket Club A, ending six points shy of their rivals. It was an unwonted 0-4 defeat to WPCC A and a 1-1 draw against Stellenbosch, both late in the season, that sealed UCT's fate. WPCC A also picked up more bonus points along the way.

But it's not exactly been a bad season for the UCT team. They won the indoor tournament at the start of the season, finished runners-up at SASSU, accumulated more points in the league this year than they did in 2004, and lost only two matches for the entire season (in the SASSU final and, of course, against

"Overall, we had a win and two seconds," says coach Pierre le Roux. "Which wasn't too bad - we were right up there till the end."

Which is more than he had hoped for when the season started. For one, he had an almost new squad to work with. And then a couple of his star players were going to be called away for provincial and national duty, so the side's rhythm was likely to be disrupted.

"In a different year, we could have won the league comfortably with what we'd done this year," says Le Roux.

He's also looking at the bright side of the second team's relegation, two draws the best UCT B could manage the entire season (they lost 15 games). He wouldn't have been too surprised about that, what with the even younger squad he had there, players jumping from school competition right into the top WP league.

A year away from the top-flight may be just what the doctor ordered, thinks Le Roux.

"They can focus more on winning than just limiting the damage," he says.