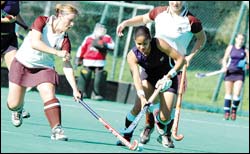 Liesel Dorothy (in blue) tries to weave her way past the Somerset defenders.

Athletics: July 31 saw the last of the season's cross-country meetings, hosted in Glencairn. Unfortunately, neither the men nor the women fielded full teams, although in the women's 8km race Unice Vorster improved on her previous week's position, finishing second. Poor turnout notwithstanding on the day, the UCT team finished the league second behind Adidas in the women's 8km category. The worst placing the side took at any of the previous six races in the competition was second. Contributors to the team were Vorster, Lauren Stewart, Helen Clark, Karla Burger, Carrie Ritter, Debbie Noel, Marion Hansen, Kerry-Ann Marais and Meggy Brink. In the men's 12km section, UCT finished tied fourth with Harmony. A week and a bit later, Vorster, finishing 15th overall, recorded the best time for a UCT student in over 10 years when she completed the Totalsports Women's 10km Race on Women's Day, August 9, in a personal best of 38:37. Lauren Stewart was 17th in 39:10. Robyn Williams was the sixth junior, running 41:14. The next few races coming up are the WP Cross-Country Champs at Pollsmoor on August 20, and the Edgars 10km race at Green Point the next day, Sunday, August 21.

Hockey (men): The men's first side is back on the boil. After a 0-4 defeat to Western Province Cricket Club A, the side stepped things up a notch in their first playoff game - each of the top four sides play each other for a last stab at points - and routed Pinelands 5-1, earning a valuable bonus point. That still leaves them four points shy of WPCC A, though. The men's B side, also competing in the Grand Challenge league, lost 2-3 to Central in the bottom-four playoffs, and look likely to be relegated.

Hockey (women): They can smell it, but the women's side doesn't have the second spot in the women's Grand Challenge league in the bag just yet. Not with WPCC breathing down their necks. But a 3-0 win over Somerset West in the women's playoffs certainly helped, and they now move six points clear of their closest rivals.

Rugby: After victories over FNB Victorians and Durbanville-Bellville, things are looking up for the FNB UCT rugby side. That probably has to do with the top-notch consultants president Dugald MacDonald has called in - former Stormers coach Alan Solomons, back in South Africa after a spell abroad, and Springbok Rob Kempson have both agreed to lend a hand until the end of the year. Relegation - two of the 10 teams go down - would be unthinkable, says team manager John le Roux, as every other UCT team would also have to move a league lower. Although they can hardly be said to be out of the woods just yet, the two recent wins have helped the team jump to eighth position. "There's light at the end of the tunnel," says Le Roux. If you'd like to support the team, they have two home matches coming up - against Helderberg on August 20, and versus SK Walmers on August 27. Both matches will be played on the main rugby field on upper campus, and start at 16h00.