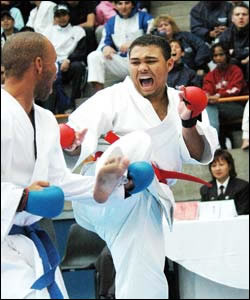 Shining star: Sheldon Aspeling in action for UCT at the Sassu games.

The June/July break again saw a score of student tournaments hosted around the country under the banner of the South African Student Sports Union (Sassu). Here's a summary of how some UCT teams managed.

Athletics: At the Sassu cross-country champs in Grahamstown in July, Unice Vorster had a good run to finish ninth in a very strong field. Meggy Brink was 13th and Kerry-Ann Marais 15th, giving the team fourth place overall. In the men's 12km race, Teboho Phooko ended 34th and Ian Rogers came in 49th. In the road relay, Vorster joined the Maties team to finish seventh, in another a strong field.

Badminton: This year it was UCT's turn to host the badminton games. Home advantage didn't secure victory though, and the team finished 5th overall. There were a few red-letter moments for the squad, however. The unseeded women's pair of Nicky Keitsile and Samantha Oatley finished third in the women's doubles, trumping the fourth-ranked team from Stellenbosch in the third-place playoff. Jean-Pierre Charpin also won the men's plate competition.

Basketball: Unlike most other Sassu competitions, regional teams rather than individual institutions vie for glory in basketball. Two UCT players - Farai Chizana and Gidon Judes - made it into the WP men's side that travelled to Nelson Mandela Metropolitan University in Port Elizabeth for the Sassu tournament. The team did well despite being convened only two weeks ahead of the competition, but finished runners-up to Gauteng. A fair reflection, says coach Steve Hackner. Sadly, no UCT students were included in the WP women's team.

Cycling: UCT also hosted this event, which was held all around Cape Town over three days and five stages. The competition included a couple of road races, a time trial, a killer hill climb and a kermesse (a short circuit) staged at the Killarney Race Track. In the men's event, UCT finished second by some 10 minutes to Stellenbosch. William Robinson in seventh place overall was the best UCT rider. Tamlyn Benedict was UCT's sole representative in the women's event.

Gymnastics: UCT earned a solid third place at the Sassu gymnastics games, held on the Pretoria campus of the Tshwane University of Technology. The women finished third in their category, while the men managed a respectable fourth position. One highlight - "We had more girls this time, which was quite nice," says the club's Margot Scheffer.

Hockey: A double whammy for UCT. Both the men's and women's teams made it into their respective A section finals, and both lost - the men 0 -1 to Stellenbosch, the women by the same scoreline (via a golden goal) to hosts the University of Pretoria. Notwithstanding that defeat, the women are over the moon. Unknowns in the event, this year was their first back in the A section in some time. They won't be easily forgotten, though, beating defending champions North-West University 2-0 in their opening game and upsetting archrivals the University of Stellenbosch (at whose hands they had suffered a 1-6 drubbing in a WP league match just a few weeks before) by 1-0 in the semi-finals. "What a week we had - we exceeded our wildest expectations," says captain Natalie le Brun. "I think we emerged as a force to be reckoned with in the future." Sassu remains a sore point for the men, however, this time short three of their young players who were taking part in the Junior World Cup. The team just has not managed to perform at its peak in the event. "We lost to a team we haven't lost to in six years, and we were the better team there," says coach Pierre le Roux about that defeat to Maties in the final.

Karate: Despite homeground advantage, UCT had to settle for a string of second spots. The team finished second overall, the men were trumped in the final of the team fighting competition, and Sa'diyya Larney (kata), Cheryl-Lynn Freeman (fighting), Sheldon Aspeling (fighting) and captain Imraan Sulaiman also ended runners-up in their respective single categories.

Volleyball: The UCT club rounded up two stopgap squads to travel to the Nelson Mandela Metropolitan University in Port Elizabeth for the Sassu volleyball games, the first time in eight years that UCT was represented at the event. As expected, the teams didn't stand out. The men finished ninth overall after winning the plate competition - for teams not in the top eight after the first round of matches - and the women finished 14th. "We weren't really looking to get results this time, but it was good that we went," says the club's Shukri Toefy.