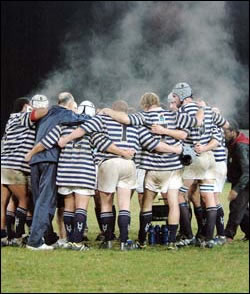 Warming up: UCT was steaming, but couldn't get the better of Maties in the recent intervarsity.

Season form hasn't counted for much in the recent rugby intervarsities between FNB UCT and the University of Stellenbosch.

Just about every year, the Maties, bar one or two bumps in the season, sweep everyone aside as they run away with the title. UCT, in contrast, have had to settle for respectable but hardly spectacular mid-table anonymity.

Even so, there have been a couple of photo finishes over the past few years as the UCT students stepped up their game for this most talked-about of clashes. Ikeys almost got the better of Maties in an eight-all draw in 2002, were pipped 18-20 in a 2003 heartbreaker (Maties won the game with a try three minutes from time), and of course UCT finally trumped Maties, by 26-20, in another tight affair last year.

This year's match, played on the evening of ran to 2005 form, though. UCT is struggling for points this season - the team was on a four-match losing streak prior to the intervarsity - and was outclassed 3-30 by their Stellenbosch rivals, who are almost certainly heading to an umpteenth championship title.

As has become wont for the intervarsities, Maties hogged the ball and Ikeys defended valiantly. In fact, Stellenbosch had to wait until added-on time in the first half to score their first try. But the dam broke in the second half as UCT tired, and Maties ran in three more tries.