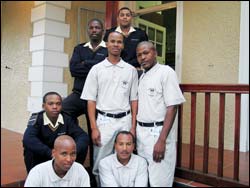 Since Monday Paper's previous crime article, Campus Protection Services (CPS) have reported a remarkable decrease in the number of crimes on campus.

This is thanks to those vigilant individuals who have taken responsibility for their own safety.

"Individuals have taken ownership of the process and are looking after their possessions," noted CPS operations manager Stuart Wragg. "We commend them for this but would encourage them to continue to report all crimes. We then know what is happening on campus and how we should deploy our resources."

Wragg would like to acknowledge the following individuals for their alertness: Students Siyasanga Sauka and Sikelewa Ndwayi noticed two suspects tampering with a student's car outside Baxter Residence. The suspects had hack-sawed the steering wheel in an attempt to remove the steering lock. CPS managed to arrest one suspect, whom they believe is part of a syndicate operating in the area.

Kopano resident Carlo Geretto activated the fire alarm after noticing a suspicious person in the residence. Geretto provided a description of the suspect and he was chased into Mowbray where he was apprehended. CPS believe the suspect has been involved in numerous residence thefts.

Postgraduate students Dean Hodgekiss and Yohannes Tsegai conducted a survey among postgrad health sciences students to identify perceptions and security concerns and this led to a workshop being set up with CPS.

Student Corinna Arndt made use of the CPS suggestions box to provide information on the vulnerability of the Mostert Mill bridge area. Arndt even took the time to meet with CPS to discuss possible solutions to deployment in this area.

Staff members Keith Balchin, Karen van Blerk, Glenn von Zeil and Mignon van der Merwe are praised for being proactive and involving CPS in their relevant areas. These individuals and their colleagues go to great lengths to include CPS in their security discussions and plans.

The following crime prevention officers have been involved in many successful arrests on campus: Thoza Hobongwana and Lorenzo Galant have consistently been involved in numerous arrests of trespassers. Thembisile Tyolweni approached five suspects trying to break into a vehicle in Falmouth Road and was stabbed with a screwdriver. His injuries were minor but CPS were involved in a high-speed car chase on the N2 and into Langa. Although the suspects got away, their getaway car was found and handed over to the Woodstock police.

Need for Reservists SAPS Mowbray is looking for civilians who would like to join their police reservist service. It is a voluntary service and there are two categories which are offered: A - Category - normal police work comprising attending to complaints, patrols and crime prevention operations. Training is essential and members work in uniform.

Male or female South African citizens between the ages of 18 and 65 who do not have a criminal record, who are prepared to work a minimum of 16 hours per month, who have a desire to help people, and who preferably reside in the Mowbray or surrounding areas, are asked to contact Inspector Arthur Minnaar or Captain Adrian Jackson on tel or