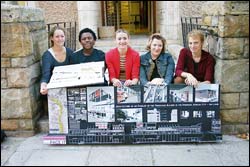 Four third-year students from the Bachelor of Architectural Studies course at UCT returned from a week-long visit to Johannesburg elated. Lauren Kemp and Ruth Kirchmann received joint first prize, with Wits, for their entry in the Murray and Roberts Des Baker Student Competition, and Katlego Motene and Lucie de Moyencourt received an honourable mention for their submission. A group from the University of Pretoria won third prize.

It is the third year running that UCT students have won this competition.

The Architectural Student Congress is an event that rotates each year between the schools of architecture in South Africa. The Murray and Roberts Des Baker Competition, which becomes part of the third-year design studio programme leading up to the congress, forms part of this event and serves as a showcase for work produced by the various schools.

Titled Moving Space, Liberating Urban Architecture, the congress was hosted by the University of the Witwatersrand from April 17 to 22, and was packed with exhibitions, tours in and around Johannesburg, various documentaries, social events and lectures and discussions by local and foreign architects, artists and journalists.

The competition theme was Body Architecture City, inviting students to "think through the meaning of the relationship between the body, architecture and the city in contemporary South Africa, with the aim of representing this analogy, both in terms of mapping and resultant architectural space".

Two best entries were submitted from each school, resulting in representations from South Africa, Mozambique and Zimbabwe. A total of 25 submissions was exhibited in the cells of the old fort on Constitution Hill in Johannesburg during the week of the congress.

The jury was made up of a range of architects from South Africa and abroad who also presented their own work and ideas at stimulating lectures during the week of the congress. They were Jennifer Beningfield (SA) from London, Monica Bertolino (Argentina) from Cordoba, Duzan Doepel (SA) from Rotterdam, and Giuseppe Lignano and Ada Tolla (Italy) from New York.

The seven best submissions were projected on two large open-air screens in the fort courtyard with comments on the work from the jury. Murray and Roberts sponsored the prizes of R15 000 for each first prize and R5000 for the third prize.

The submission designed by Kemp and Kirchmann was titled Interface It and provocatively demonstrates how housing in the future could be provided along an established economic urban corridor. Motene and De Moyencourt called their submission Urban Basin, bringing the urgency of the current water shortage to public attention by creating a reservoir under a public square.

Kemp and Kirchmann said: "We feel incredibly honoured to have won the Murray & Roberts, Des Baker 2005 award, but the best is that all the hard work literally paid off!"