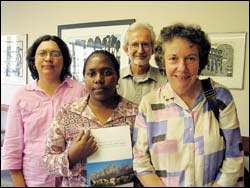 Climate change and its implications for South Africa will be the subject of a chemical engineering departmental seminar presented by Stefan Raubenheimer, executive officer of SouthSouthNorth.

SouthSouthNorth is an international organisation, which, together with a group of technical leaders, was formed at the UN conference on climate change in Bonn in 1999. It develops project-led programmes relating to climate change, energy and sustainable development. Mr Raubenheimer leads a large team of experts and support staff in six countries.

The talk will take place from 15h00 to 16h00 on Friday May 6 in the seminar room of the chemical engineering building (on the same level as reception). For further information, please contact Debbie de Jager at 6502509, or e-mail her at debbie@chemeng.uct.ac.za.

c*change, the Centre of Excellence in Catalysis and the Centre of Excellence in Birds as Keys to Biodiversity Conservation at the Percy FitzPatrick Institute were invited by Joseph Tshikomba of the Department of Science and Technology (DST) to set-up exhibitions in the halls of parliament during the Minister of Science and Technology's budget vote speech which took place on April 7. Other exhibitors were Cape Biotech, BioPad, DST Poverty Alleviation and CSIR Digital Doorway.

Dr Rein Weber from c*change said " The c*change display was well received by people involved in science and technology but I don't think there was too much response from politicians themselves. The budget speech and debate centred more on integration of DST objectives with the larger objectives of the government. There was little that spoke directly to strategies and implementation issues."

A group of people who have been hard at work gathering information finalising the self-evaluation document which will form an integral part of an audit to be carried out by a panel appointed by the Higher Education Quality Committee in May. The panel visits UCT in the week of May 16 to 20 during which time they will conduct interviews with students, staff and other UCT stakeholders.

The document, which will be used as the basis for the audit, was produced after extensive consultation and information gathering.