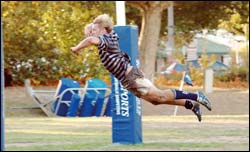 Heroes all: Craig Cleu (above) dives over for UCT's last try in its annual Mark Jordaan Memorial match against False Bay

Cricket: The men's first team has won the Western Province Cricket Association's (WPCA) one-day club trophy. The side beat Cape Town Cricket Club in the final, played at Sahara Park Newlands on March 11. UCT batted first, and although losing big-hitting captain Doug Worth in the second over, amassed a competitive 252/9 of their allotted 45 overs, notwithstanding a late wobble. James Kuiper (nephew to Adrian Kuiper) and Martin Walters set up the innings with a 140-plus partnership, Kuiper top-scoring with 93 off only 101 balls, while Walters chalked up 74 off 88 balls. It then took UCT just 29.2 overs to knock over Cape Town for 113 all out. Farhaan Behardien was the most miserly of the UCT bowlers, taking 2/17 off seven overs. Tanner Rock took 3/23 off 7.2 overs.

Rugby: FNB UCT beat False Bay by six tries to three in the sides' pre-season Mark Jordaan Memorial match. The annual tie is played in memory of the former UCT and False Bay player who died in 1987. To celebrate the two teams' running approach to the game, the clash is decided not on score (UCT won 36-17 on the day), but by virtue of the number of tries scored. Since the event was first introduced in 1989, UCT has triumphed all of 17 times, a tally that includes this year's win.

Hockey: After losing to Pinelands last year, the men's first side has reclaimed the pre-season Western Province indoor tournament. They beat Western Province Cricket Club by 5-3 in extra time in the recent final. Sadly, the women's side, champions two years ago, lost 0-2 to Bellville in the final of their competition.