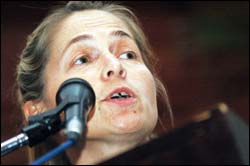 Heads down: Competitors in the Minquiz competition, Jameson Hall.

The world currently boasts the largest youth generation in history, according to a 2003 United Nations report.

Little wonder that some say youth culture - the music, the fashion, the pubescent superstars - is, or very soon will be, the dominant culture in most societies.

With that kind of clout, the topic attracts regular scrutiny. Recently the Centre for Film and Media Studies (CFMS), too, cast its eye over the subject at its Youth Culture and Media Colloquium, where broadcasters, marketers, writers and scholars shared their diverse thoughts on the issue.

The interest in youth culture is multi-pronged, says Associate Professor Ian Glenn, director of the CFMS. The marketers, of course, come to mind first as they have a sizeable stake in understanding the group's likes and dislikes. (Dubai, Glenn pointed out in example, is targeting African youth as a key market.) "But youth culture raises a big question that goes beyond just selling things to a youth audience," says Glenn. So the conference also looked at the way youth respond to the news media, what gender images they embrace, their role in local politics, and recent trends in music, among other things.

The topic also carries weight at the CFMS, notes Glenn. Not only does the centre cater to a youth audience - its students - but it also produces and analyses youth culture.

"This is the culture that students are interested in, and it's important for them to be critical of it."