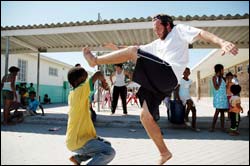 Not just for kicks: Student John Kerr (right) and Harda Kgotloka work through their capoeira moves.

Recently, representatives from a number of UCT sports clubs packed balls of all shapes and sizes, sticks, bats and other tools of their trade to showcase their codes to kids from Nyanga. In response, children swarmed to the Shawco centre in the township to try their hand at hockey, soccer, cricket, basketball, chess, netball and capoeira, among others.

"It exceeded all expectations - which is surprising, as we had very high expectations," says student "JJ" de Castro Maia, who spearheaded the drive.

This was no hit-and-run exhibition. The project follows on from an outreach programme led by De Castro Maia and Margot Scheffer, of the capoeira and gymnastic clubs respectively, that first kicked off in 2003. For most of last year, the two ran regular sports clinics from the Shawco centre in Manenberg, pulling kids off the streets into more constructive activities.

UCT Sports Administration named the duo as winners of its Transformation Trophy for 2004.

Rather than rest on their laurels and, trophy in hand, call it a day, De Castro Maia and Scheffer chose instead to spread their wings to Nyanga. Here too, says De Castro Maia, students will host weekly sessions in sports like capoeira and soccer, as well as occasional one-off sessions on yachting and the like.

De Castro Maia is after longevity for the programme, which he hopes Shawco will adopt as a permanent project. "Our biggest goal is to monitor and document the programme, so that it can be passed on," he says.

Shawco is making headway in that regard, says director Varkey George. The organisation has attracted an American sponsor, Charles Gillis, who will shortly be selling Shawco-branded T-shirts and sports goods both here and in the US. Some of the proceeds from that initiative will go towards the Shawco sports coffers.

With students' continued support and backup from Shawco, the payoff from the programme can be huge, says George.

"We want to give the youth in these areas a sense of belonging. Rather than them finding homes in gangs, we want them to find homes in sports teams."

That's going to take some work, but UCT students, by all accounts, are ready to play ball.