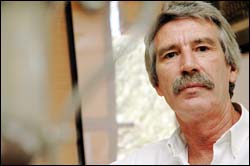 Best achiever: John Donald has been garlanded with a Lifetime Achievement Award from the Western Province Sports Council.

John Donald, director of sport at UCT, has been honoured with a Lifetime Achievement Award from the Western Province Sports Council.

Donald won the accolade for his longstanding commitment to hockey in the province and beyond. Donald was at the frontline of the move to unify the sport's many unions and associations in the Western Cape in the early 1990s. He was a founder member of the Western Province Hockey Union (WPHU), the organisation that sprang from that unification. The WPHU later became the Western Province Hockey Association (WPHA), which Donald led as president - as a volunteer - from 1994 to 2003.

While president of the WPHA, Donald pushed hard to transform hockey in the province. He saw to it that a quota system was adopted at all levels of the game, and that the association and clubs stuck to it. He also earned a reputation as an uncompromising champion of transparency in sports organisations, a talented fundraiser, and a straight talker. "If he didn't agree with something, he'd say it," recalls AndrÃ© "Bubbles" le Roux, who succeeded Donald as president of the WPHA.

In 2003, on the eve of his retirement from the WPHA, Western Province won the Province of the Year Award from Saha. WPHA duly named Donald as Honorary Life Vice-President.

The association also nominated him for the Lifetime Achievement Award from the Sports Council, an affiliate of the National Sport Council.